Phyllis and I lost a dear friend on Tuesday, we’d known him for fourteen years and shared many good times together.  His name was Sam and he was a mutt.

Now why does a collie person write about a mutt and mourn his loss so greatly?  If you don’t know perhaps you don’t know the responsibilities of dog ownership.  It’s often been said that if you keep animals you should be committed to keeping them well.  That includes knowing when to say, “goodbye.”

Terhune wrote once about a dog that had to be put down.  He didn’t want to put him thru going to the vet and having a stranger in strange surroundings end his life.  He gave the dog his favorite treat, a piece of steak, and while he ate, shot him in the head.  The logic is plain, but the will to follow such a plan does not exist in most of us.

One of the most difficult things about keeping any kind of animal is knowing that you are going to outlive them unless you happen to be a really old dinosaur.  Over the years I can remember saying goodbye to many friends and very few obliged by passing away on their own.  When discussing this topic the gentleman who used to announce for Westminster said, “better a week too soon, than a day too late!”  Basically we don’t wait for animals to suffer serious pain or discomfort to say goodbye.

In my strange way of thinking I’ve found its much more satisfactory when you lose an animal friend or a human, for that matter, to dwell on the good memories rather than the loss.  We all will feel some sadness at such a time, but a celebration of life is much more satisfying than the mourning of a loss.

Years ago when judging in California Murray Drucker, who published dog magazines, including The Collie Review came to my ringside.  It was obvious that Murray was gravely ill and he told me his doctor had advised him not to come.  In spite of that he came to apologize for not being able to attend the dinner after the show.  The Collie Review was awarding me its outstanding service award and someone else would have to present it.  I was the last recipient of an award that numbered Rudd Weatherwax, Steve Field, Florence Ilch, and Dr. McCain as honorees.  The plaque is one of only two awards that I’ve kept over the years and it means a great deal to me because of the names that I share it with and the man who came to my ring that day to say farewell.

When Murray passed away shortly there after I heard that he left a letter for his wife and daughters.  The reported contents may or may not be accurate.  But they sound like something Murray would write.  It was basically entitled “Don’t Cry For Me” and listed many of the successes and enjoyable things that had been part of his life including the family that he didn’t want to sink into sadness.  True or not the sentiment has stayed with me over the years and become part of what I firmly believe.

Back to Sam, who started this whole thing.  He was about nine months old when we adopted him from the local shelter.  He’d been living near a grocery store and dining on handouts from the employees.  He was a streetwise pup and knew nothing of proper behavior.  I told Phyllis that he must be part collie because of his color and markings (red sable, white collar and feet).  Either she believed me or more likely just liked Sam too.

The first years were a learning experience for Sam and for us.  He chewed anything he could put in his mouth.  He teased the other dogs unmercifully because he was extremely quick and would nip and run.  He had no idea of walking on a lead and would yank and pull until your arm was tired.  The good news was that he was very smart and could be taught.

Over the years Sam did learn a lot and so did we.  Our daughter, Alexandra, loved to deck him out in silly outfits, like some old sneakers and Sam thought that was fine.  When he moved up to be our house dog he quickly learned to jump up on the grooming table to have his feet wiped before he came indoors.  On trips to the vet he jumped onto the counter to get a biscuit that he knew he deserved.

Sam joins a host of others over the years who remain in my memory as pleasant thoughts.  Most are collies with peerless pedigrees, but none were more loved that Sam.  You can be a breeder, exhibitor, writer, or judge, but if you don’t just plain love dogs you’ve missed the whole point.  Each of these old friends are in Heaven  wagging their tails and having a great time as they say, “Don’t Cry For Me!” 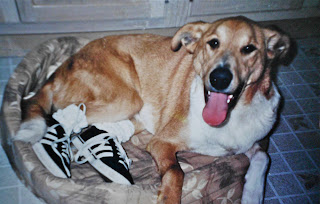